The wonders of Genistein

Genistein has been the focus of scientific research since 1966. This is because of the amazing range of effects it has on the body –  because of its ability to remove damaging free radicals, and inhibiting others in the body –  when consumed regularly.  Genistein is one of the isoflavones that is found in soya and some other plant based products. However, soya products such as soya flour and soya mince are the only significant source of genistein that one can get. In this article, we look at how genistein interacts with the most common diseases amongst humans.

Genistein binds itself onto receptors on cancerous cells in the place of oestrogen. Cancerous cells need oestrogen to grow, so when genistein replaces the oestrogen, the cancerous cells are unable to develop.  The other way in which genistein prevents cancer from growing is that it deprives the cancerous cell of the protein tyrosine kinases, which the cell needs to flourish. This also stops the cancer cell from developing its own blood supply because it disrupts the action of certain enzymes.

Genistein exerts lipid lowering effects and reduces fatty acid oxidation. This is ideal because the arterial cells in our bodies only absorb oxidised LDL cholesterol. If the process of oxidation is not prevented, the risk of arteriosclerosis (when the blood vessels that carry oxygen and nutrients from your heart to the rest of your body (arteries) become thick and stiff — sometimes restricting blood flow to your organs and tissues) increases. Thus, genistein can prevent the formation of heart attacks and strokes because it acts as an anticlotting agent.

When genistein is consumed, the compound interferes with the cellular process of HIV (which is necessary for the virus to infect other cells and replicate) Unlike other HIV medication, genistein doesn’t act directly on the virus, but rather gets in the way of the virus, inhibiting it.  This makes it more difficult for the virus to become drug resistant. The studies on the effect of genistein on HIV is still in the early stages but if clinically proven effective – genistein will most certainly be used as a complementary treatment for those people living with HIV.

Genistein is constantly proving that it is a great inhibitor for many diseases, the above mentioned and much more, and other ailments, because of the way it interacts with the cells of the body. With all the studies being done on the wonders of genistein – the future is looking a lot more promising for our health.

Irwing Soya is a leading soya flour and soya mince manufacturer in Johannesburg, contact us for more information.

Soya and your health: Cancer

What is Soya Flour? 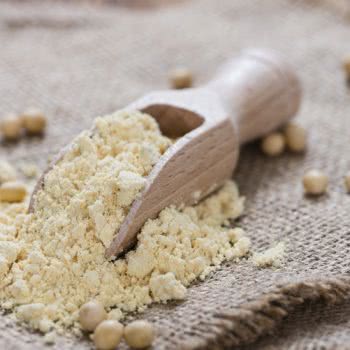